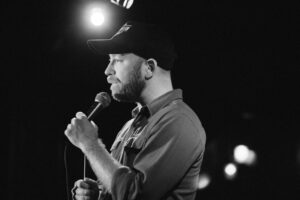 While he’s quickly become a household name in standup comedy circles, Kyle Kinane had to pay his dues like anyone else. In this classic interview, the veteran funnyman explains how he got here.

You started doing comedy while you were at Columbia College in Chicago, right?

Kyle Kinane: Yeah, I’d done one show at Zanies downtown. I read somewhere in a newspaper they were having an open casting call for comedy, so I did that. It was later at Columbia, about a year later or so, that I saw somebody in my classes that I saw at the comedy show. I was like, “Oh, hey.” I had no idea how comedy worked, I didn’t know where you started or that you could just do it, and so I saw that guy, who I still talk to. He said, “Oh yeah, there’s open mics everywhere.” He told me about all these places to go, and I started doing that, and that was ’99.

Early on, how did it go? Did things progress quickly? Did you bomb a lot?

KK: I’d say a pretty steady average of both. There were enough shows that gave me just enough hope to go keep doing this. “Let’s see what happens next week, you got enough laughs, let’s see what happens.” And then the next show would be a total embarrassment, and make me wonder why I even thought I could get on the stage and entertain somebody. And then the next show would be good, and then the next one would be bad. So it was this constant battle, and that’s why it’s still interesting. There’s still no guarantee that a show will go well, so that’s why it’s still the best thing in the world.

Surely more of them are going well now, though, right?

KK: Yeah, the percentage is a little bit higher, but writing something new, especially if it’s not a formulaic—I mean, I don’t really have much of a formula to the writing, so it’s like, “Oh, this is something stupid I did again. I hope nobody’s sick of hearing me doing dumb shit, ’cause that’s all I got.” And that’s still what makes me excited to go perform. And like now, I’ll do nine shows at a club at 45 minutes, and by the end, I’m just sick of my own voice. I gotta go get into some kind of trouble so I have something to talk about next week.

Were you always a storyteller, or did that come with time?

KK: No, it’s definitely one of those things I think develops. You gotta know how to write jokes, first and foremost. Some people are just fantastic bullshitters from day one. Everybody knows those guys—the ones in high school that you just wanna sit at a party and listen to tell a story. What happened, I was more proficient in the smartass department, so that’s how the comedy started. That, and the weird observations, the more Hedberg-esque, oddball one-liner observations. Especially when you start doing comedy, you’re only getting five-minute sets. So, okay, I got jokes. I gotta write jokes for five minutes. You’re focused on the shorter sets of your jokes. By default, they’re shorter, you want to get them in there, you want to get in as many laughs as you can in five minutes. When you’re starting, that’s what you translate into success, is how many laughs you get, as opposed to “Well, everybody listened to me for five minutes.” With longer sets, I guess I gotta stretch out some more. There’s a little bit more room to venture into stranger territories, and what starts developing is stories. It’s been fun. I still love a well-crafted joke. Twitter’s been great for that.

Is this a style you think you’ll stick to, or do you see yourself moving away from that?

KK: Now that I headline, it allows me to do these things for 45 minutes. I just want to be cautious. Sometimes you see performers, and I think they rely a little too heavily on their reputation. You’ll see them just telling some story, and it’s like, “Despite who’s saying this, it’s just a shit story. It’s just boring, it’s not funny.” And people, I think, can get jaded thinking just because of who they are, somebody wants to hear it. And I hope I don’t get caught in that. I’m hardly a known name, but I don’t want to go, like, “Oh, people call me a storyteller comedian, let me just go up and just talk about my day.” I don’t want that to happen. But I do have fun doing it. I’ve got poison oak all over me, so I can tell them that tale.

Where do you want to take your career?

KK: I will welcome any kind of decent opportunity that comes my way. There are some voiceover things that have come up that I never particularly shot for, but the opportunity came up, and I’m like, “Yeah I’ll give it a shot.” Just like the thing with the pilot with Braunger, to act in that. I was like, “I don’t fancy myself an actor, but why not? Why would I not?” You know, as long as I feel like I’m not doing something that compromises any kind of beliefs or—I mean, I don’t have any kind of reputation, but as long as I can go to bed at night and I’m not doing a prank show, or tricking somebody and being mean, then why not try these things?